One of the best-known prayers of the Orthodox Church speaks of the spirit of God being "present in all places and filling all things." This profound affirmation is basic to Orthodoxy's understanding of God and His relationship to the world. We believe that God is truly near to us. Although He cannot be seen, God is not detached from His creation. Through the persons of The Risen Christ and the Holy Spirit, God is present and active in our lives and in the creation about us. All our life and the creation of which we are an important part, points, to and reveals God.

There are special experiences in our corporate life as Orthodox Christians when the perception of God's presence and actions is heightened and celebrated. We call these events of the Church Sacraments. Traditionally, the Sacraments have been known as Mysteries in the Orthodox Church. This description emphasizes that in these special events of the Church, God discloses Himself through the prayers and actions of His people.

Not only do the Sacraments disclose and reveal God to us, but also they serve to make us receptive to God. All the Sacraments affect our personal relationship to God and to one another. The Holy Spirit works through the Sacraments. He leads us to Christ who unites us with the Father. By participating in the Sacraments, we grow closer to God and to receive the gifts of the Holy Spirit. This process of deification, or theosis, as it is known by Orthodoxy, takes place not in isolation from others, but within the context of a believing community. Although the Sacraments are addressed to each of us by name, they are experiences which involve the entire Church.

The Sacraments of the Orthodox Church are composed of prayers, hymns, scripture lessons, gestures and processions. Many parts of the services date back to the time of the Apostles. The Orthodox Church has avoided reducing the Sacraments to a particular formula or action. Often, a whole series of sacred acts make up a Sacrament. Most of the Sacraments use a portion of the material of creation as an outward and visible sign of God's revelation. Water, oil, bread and wine are but a few of the many elements which the Orthodox Church employs in her Worship. The frequent use of the material of creation reminds us that matter is good and can become a medium of the Spirit. Most importantly, it affirms the central truth of the Orthodox Christian faith: that God became flesh in Jesus Christ and entered into the midst of creation thereby redirecting the cosmos toward its vocation to glorify its Creator.

The Holy Eucharist, which is known as the Divine Liturgy, is the central and most important worship experience of the Orthodox Church. Often referred to as the "Sacrament of Sacraments", it is the Church's celebration of the Death and Resurrection of Christ offered every Sunday and Holy day. All the other Sacraments of the Church lead toward and flow from the Eucharist, which is at the center of the life of the Church. The previous pamphlet in this series was devoted to the meaning and celebration of the Eucharist in the Orthodox Church. The Sacrament of Baptism incorporates us into the Church, the Body of Christ, and is our introduction to the life of the Holy Trinity. Water is a natural symbol of cleansing and newness of life. Through the three-fold immersion in the waters of Baptism in the Name of the Holy Trinity, one dies to the old ways of sin and is born to a new life in Christ. Baptism is one's public identification with Christ Death and victorious Resurrection. Following the custom of the early Church, Orthodoxy encourages the baptism of infants. The Church believes that the Sacrament is bearing witness to the action of God who chooses a child to be an important member of His people. From the day of their baptism, children are expected to mature in the life of the Spirit, through their family and the Church. The Baptism of adults is practiced when there was no previous baptism in the name of the Holy Trinity.

The Sacrament of Chrismation (Confirmation) immediately follows baptism and is never delayed until a later age. As the ministry of Christ was enlivened by the Spirit, and the preaching of the Apostles strengthened by the Spirit, so is the life of each Orthodox Christian sanctified by the Holy Spirit. Chrismation, which is often referred to as one's personal Pentecost, is the Sacrament which imparts the Spirit in a special way.

In the Sacrament of Chrismation, the priest anoints the various parts of the body of the newly-baptized with Holy Oil saying: "The seal of the gifts of the Holy Spirit." The Holy Oil, which is blessed by the bishop, is a sign of consecration and strength. The Sacrament emphasizes the truths that not only is each person a valuable member of the Church, but also each one is blessed by the Spirit with certain gifts and talents. The anointing also reminds us that our bodies are valuable and are involved in the process of salvation.

The Sacraments of initiation always are concluded with the distribution of Holy Communion to the newly-baptized. Ideally, this takes place within the celebration of the Divine Liturgy. This practice reveals that Orthodoxy views children from their infancy as important members of the Church. There is never time when the young are not part of God's people.

As members of the Church, we have responsibilities to one another and, of course, to God. When we sin, or relationship to God and to others distorted. Sin is ultimately alienation from God, from our fellow human beings, and from our own true self which is created in God's image and likeness.

Confession is the Sacrament through which our sins are forgiven, and our relationship to God and to others is restored and strengthened. Through the Sacrament, Christ our Lord continues to heal those broken in spirit and restore the Father's love those who are lost. According to Orthodox teaching, the penitent confess to God and is forgiven by God. The priest is the sacramental witness who represents both Christ and His people. The priest is viewed not as a judge, but as a physician and guide. It is an ancient Orthodox practice for every Christian to have a spiritual father to whom one turns for spiritual advice and counsel. Confession can take place on any number of occasions. The frequency is left the discretion of the individual. In the event of serious sin, however, confession is a necessary preparation for Holy Communion. God is active in our lives. It is He who joins a man and a woman in a relationship of mutual love. The Sacrament of Marriage bears witness to His action. Through this Sacrament, a man and a woman are publicly joined as husband and wife. They enter into a new relationship with each other, God, and the Church. Since Marriage is not viewed as a legal contract, there are no vows in the Sacrament. According to Orthodox teachings, Marriage is not simply a social institution, it is an eternal vocation of the kingdom. A husband and a wife are called by the holy Spirit not only to live together but also to share their Christian life together so that each, with the aid of the other, may grow closer to God and become the persons they are meant to be. In the Orthodox Marriage Service, after the couple have been betrothed and exchanged rings, they are crowned with "crowns of glory and honor" signifying the establishment of a new family under God. Near the conclusion of the Service, the husband and wife drink from a common cup which is reminiscent of the wedding of Cana and which symbolized the sharing of the burdens and joys of their new life together.

The Holy Spirit preserved the continuity of the Church through the Sacrament of Holy Orders. Through ordination, men who have been chosen from within the Church are set apart by the Church for special service to the Church. Each is called by God through His people to stand amid the community, as pastor and teacher, and as the representative of the parish before the Altar. Each is also a living icon of Christ among His people. According to Orthodox teaching, the process of ordination begins with the local congregation; but the bishop alone, who acts in the name of the universal Church, can complete the action. He does so with the invocation of the Holy Spirit and the imposition of his hands on the person being ordained.

Following the custom of the Apostolic Church, there are three major orders each of which requires a special ordination. These are Bishop, who is viewed as a successor of the Apostles, Priest and Deacon, who act in the name of the Bishop. Each order is distinguished by its pastoral responsibilities. Only a Bishop may ordain. Often, other titles and offices are associated with the three orders. The Orthodox Church permits men to marry before they are ordained. Since the sixth century, Bishops have been chosen from the celibate clergy.

Anointing of the Sick (Holy Unction) 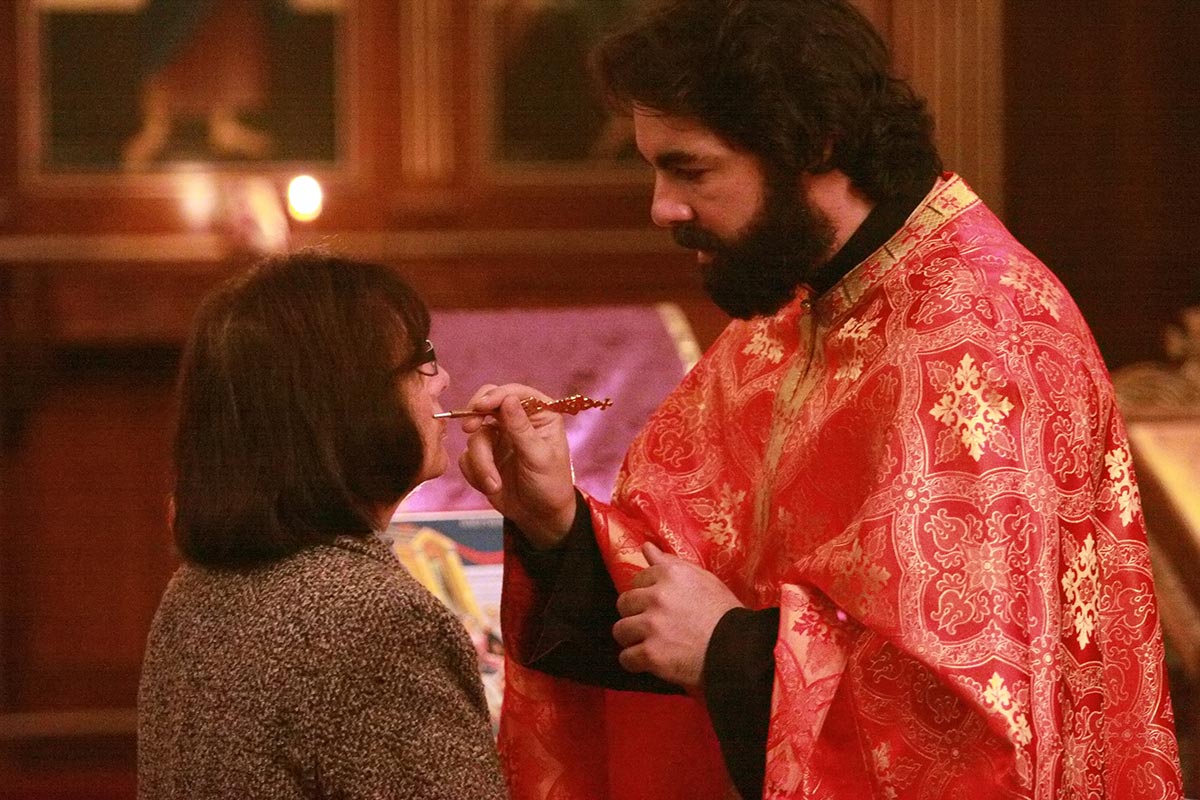 When one is ill and in pain, this can very often be a time of life when one feels alone and isolated. The Sacrament of the Anointing of the Sick, or Holy Unction as it is also known, remind us that when we are in pain, either physical, emotional, or spiritual, Christ is present with us through the ministry of his Church. He is among us to offer strength to meet the challenges of life, and even the approach of death.

As with Chrismation, oil is also used in this Sacrament as a sign of God's presence, strength, and forgiveness. After the reading of seven epistle lessons, seven gospel lessons and the offering of seven prayers, which are all devoted to healing, the priest anoints the body with the Holy Oil. Orthodoxy does not view this Sacrament as available only to those who are near death. It is offered to all who are sick in body, mind, or spirit. The Church celebrates the Sacrament for all its members during Holy week on Holy Wednesday.

Other Sacraments and Blessings

The Orthodox Church has never formally determined a particular number of Sacraments. In addition to the Eucharist she accepts the above six Mysteries as major Sacraments because they involve the entire community and most important are closely relation to the Eucharist. There are many other Blessings and Special Services which complete the major Sacraments, and which reflect the Church's presence throughout the lives of her people. Some of these are discussed in the following pamphlet in this series.

To learn more about the Orthodox Church and her teachings, you may wish to explore the following articles: Teachings of the Orthodox Christian Church

House of God: What's Inside an Orthodox Church?

Worship in the Orthodox Church Liturgy and the Holy Eucharist Special Services and Blessings of the Orthodox Church A Brief History of the Orthodox Church About this Series of Articles

Treasures of Orthodoxy is a series written for the non-Orthodox, especially those who are considering becoming members of the Orthodox Church and who wish to deepen their appreciation of her faith, worship, and traditions. They are authored by Fr. Thomas Fitzgerald, a faculty member of Hellenic College Holy Cross School of Theology. These and many more articles can be found at the Greek Orthodox Archdiocese of America website.